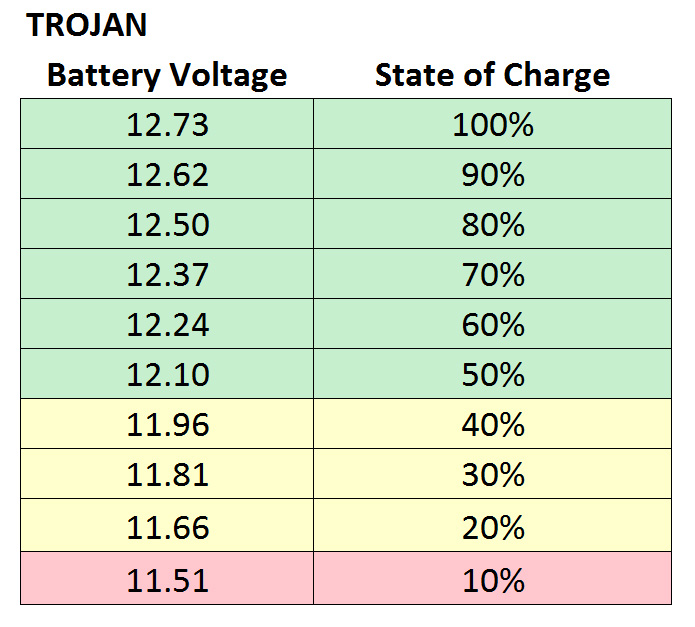 effect of SoC on battery life

How deeply one regularly discharges lead-chemistry batteries will have a direct effect on how long the battery bank will last.1)

The most common discharge limit for deep cycle batteries is 50% DoD. This gives a good balance between usability and longevity. The lowest cost per Ah occurs around 30% DoD although this requires buying, installing, and moving dead lead or unusable battery capacity.2)

Since resting is rare in most practical scenarios stopping at 12.2vdc under light loads would be a practical approach. DC expert SternWake4) says: “…those who are loading their battery and stop at 12.2v are treating their battery better, just not using all the capacity they could and perhaps seriously inconveniencing themselves by thinking they need to stop at this point, especially if the loads are fairly large, like while running a laptop and watching tv and while their fridge compressor is running.”5)

“The truest measure of a battery's state of charge is the specific gravity of the battery acid.” – Rolls battery.6)

Only flooded-type batteries are practical SoC assessment by SG of the electrolyte. Needed for this operation:

1) Banks are typically replaced when they have lost 20% of their capacity
2) 20% DoD is the limit at which manufacturers rate their battery's cycles.
3) Ah * / 1000
4) http://www.cheaprvliving.com/forums/User-SternWake
5) http://www.cheaprvliving.com/forums/Thread-Noob-Questions-About-Failing-SLA-Batteries?pid=92249#pid92249
6) http://support.rollsbattery.com/support/solutions/articles/428-state-of-charge-charging-flooded-lead-acid-batteries
electrical/depth_of_discharge.1591808509.txt.gz · Last modified: 2020/06/10 10:01 by frater_secessus