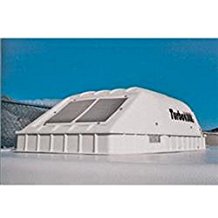 Evaporative coolers, sometimes called swamp coolers, are an option in areas with low humidity. They do not cool by a certain number of degrees, but rather output air ~5-7F above wet bulb thermometer reading.

Standard sizing is cooler cfm = cubic feet of area / 2. 1) Example: a long wheelbase, high roof transit is 411 cubic feet. Theoretically that would be 205.5cfm, but additional challenges of vanlife (direct sun, less insulation) make 411cfm a safer bet. For purposes of numbers only, a unit with those specs would cost $300 and use 150w of power on HIGH. A smaller spot cooler might be 150cfm, $100, and use 50w.

Concerning water consumption (Working backwards from residential numbers), it takes about 7gals/hour for 1500sq ft house. For a 50sq ft van like an American low-roof, that would be .23gal/hour. So ~2 gallons for 8hrs of cooling, ~4 gallons for 16 hours, and ~6 gallons every 24 hours.2) Our Transit example might consume 1.5x those amounts.

Portable units are not a perfect fit for 'dwellers since they were made for stationary use.

If you go his route, don't install any rollers that come with the unit, and restrain the cooler safely. Since small coolers put out relatively little cold put it somewhere it can blow air directly on the areas you spend the most time in.

Units with electronic controls should be run off pure sine wave inverters.