Composting toilets are waterless (dry) toilets designed for use in applications without a plumbed sewage system. They operate on two principles:

The media would compost over time, but composting toilets are emptied regularly, even if infrequently. This means the media is actually not composting to any significant degree in the toilet. Some have argued a better term for this system is “dessicating toilet” but the name is not in widespread use.

While composting toilets are often vented by a fan, this is to remove moisture from the toilet rather than to control waste odors (which are negligible).

In general an RV-appropriate composting toilet is designed for use by 1-2 people. In this use the solids compartment is used for about 2 person-months. The liquids tank fills in a few person-days.

Normal 1-ply toilet paper is safe for the solids compartment though overuse can reduced capacity and over-dry the compost medium.

Commercial composting toilets are a sit-to-pee design for both sexes. The urine diverson systems are designed to work when sitting and keeping urine out of the solids compost is critical to the operation of the toilet.

Calcium deposits (if any) on the diverter can be removed with Lime-a-way.1)

Commercial composting toilets generally keep the solids container closed by a door when not in active use. There are two approaches:

Some RVers keep a spray bottle of water handy to rinse down traces of liquids or solids that remain in the bowl. 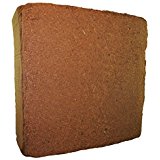 There are several commercial models suitable for RV use. One can also make a simple DIY model.

The Nature's Head composting toilet appears to dominate the market. 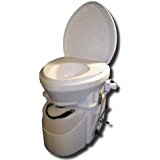 Note: The C-Head's use of an inexpensive, cut-down 5gal bucket for the solids reduces costs but has some side effects the prospective buyer should consider: 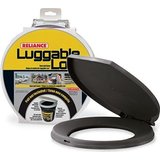 A simple composting toilet can be made with a bucket, seat, liner and absorbent media. It is very cheap but has significant shortcomings compared to the commercial models:

Before inital use a layer of media goes in the bottom of the bucket; this makes cleanup easier if the liner breaks. Then a kitchen trash bag or other liner is placed in the bucket and a layer of media8) is added.

After pooping in the bucket the deposit is covered with another layer of media.

To clean out the bucket: remove any lid, tie off the bag or liner, and remove from the bucket. Install a new liner and bottom layer of media. In areas where it is allowed you can dig a large cathole and empty the bag into it.9) Cover as normal. In urban areas where baby diapers and dog poop is disposed of in dumpsters, you might do likewise with the tied-off bags.

The bucket is an ordinary 5-gallon bucket, as one might find at a home improvement store, food prep area, or the side of the road in a ditch.

For those with less space, there are reports that some 3.5 or 4 gallon buckets have the same top dimensions as the larger 5 gallon units.10) This might be important if you are planning to use a commercial seat/lid.

A lid is required for a DIY composter as the bucket will hold the solid deposits rather than being emptied after every use. One can use a normal lid or gamma seal over the bucket when not in use, but this precludes the attachment of a commercial lid (below). The rim is quite narrow and can be uncomfortable to sit on directly. Because of this, some use a length of pool noodle split down the middle and pushed down on the rim. It has to be removed again to replace the lid.

The most common commercial seat/lid the Luggable Loo. It snaps onto the top rim like a bucket lid would.

The Privy 500 is a urine-diverting seat designed for tiny house installations. It might be adaptable to a bucket system, running the liquid into a nearby milk jug or similar. The shipping box has a cut-out template printed right on it.

There are separators/diverters sold on eBay.