Some manufacturers attempt to get around the Partial State of Charge limitations of lead chemistries by using carbon in some form. The idea is that the addition of carbon limits hard sulfation that can form in PSOC scenarios.

In the milder form, carbon is added to the negative plates. Trojan claims up to 15% more cycles from the RE17) line than non-carbon FLA in PSOC use.18) At this writing the cost premium for this ⇐15% increase in cycles is 21%.19)

Each manufacturer also has their own in-house brand, e.g. Delco for Johnson Controls and Deka for East Penn. Exide and US Battery use their corporate name for their battery brand as well. Trojan sells under the Trojan, Trillium, Reliant and Ranger brand names and Concorde sells under the Concorde and Lifeline brand names…. [Interstate is a label, not a manufacturer]… The 4 big US battery makers offer a couple price and quality tiers for their customers to choose from, but generally batteries with the same specs (AH/RC, CCA, and BCI case size) will be essentially identical. Warranty, MSRP, etc. is set by the selling brand and may differ, but the physical product is the same. – Gary RVRoamer20)

Interstate batteries made by US Battery have “U” prefixes.https://www.solarpaneltalk.com/forum/off-grid-solar/batteries-energy-storage/14996-trojan-t-105-vs-crown-235-and-what-s-wrong-with-parallel?p=195949#post195949)) ===== VRLA ===== Words of Wisdom: “Generally, gel and AGM batteries have about 20% less capacity, cost about two times more, and have a shorter cycle life than comparable flooded lead acid batteries.” – Trojan21) Valve Regulated Lead Acid batteries have the same chemistry as FLA but * the battery case is sealed (with overpressure safety valve) * the electrolyte is stabilized so it does not slosh. The electrolyte can be gelatinized or embedded in an absorbant material.22) These two features combine to make a battery that can be mounted in positions other than upright and does not require the regular addition of water. ==== AGM ==== This type of VRLA battery stabilizes the electrolyte in an Absorbent fiberGlass Mat (AGM). * PRO * able to charge/discharge huge amounts of current * can be mounted in odd positions, including upside down * generally maintenance-free which can be a benefit if mounted in inaccessible areas * no outgassing under normal conditions * CON * generally double the cost of FLA for about 20% less capacity23) * Premium AGM need much more charging current than flooded, and it may be more than solar-only setups can provide.24) The charging rate given by Lifeline, a respected AGM manufacturer, is at least C/525) or battery life will be affected. They also say it is ok to charge up to 5C26) (!).27) Odyssey specifies C/2.5 charging rates for their batteries.28)29) * even cheap AGM require more current than flooded: minimum C/5, max C/3.(20A-33A per 100Ah of battery capacity). * fully charged AGM are slightly lower voltage than FLA30) (12.6 vs 12.7). * outgassing is less likely but still need to be vented31) Common setpoints (check your manufacturer's recommendation): * charge with greater current like C/3 * Vfloat 13.2v when not deeply cycled; 13.8v when cycled daily * Vabs 14.6v - 14.7v32) Also see SternWake's advice on charging AGM batteries. ==== Gel cell ==== This type of VRLA battery gelatinizes the electrolyte to stabilize it. While renowned for their duty cycles, they are rarely used in campers. ==== Carbon foam AGM === Firefly makes the Oasis (AGM) battery with carbon foam. Claimed benefits are: * increased current acceptance * Absorption stage required only 1x/month or so rather than every day or so. Since Absorption stage is long-duration, this can cut down charging time considerably. ===== chain store batteries =====

“Deep cycle” / marine batteries found at Walmart and similar chains are not actually deep cycle batteries. Real 12v deep cycle batteries like the Trojan T-1275 are large, expensive, and very rarely seen in campers.33) It's not foolproof, but seeing a CCA (Cold Cranking Amps) spec listed on the battery suggests it is not a deep cycle battery: > While it might be tempting to estimate the AH rating of a battery from its CCA rating, there is not a simple relationship between these two battery parameters.34) Having said that, if one is aware of the limitations of the battery it can play a role in the campervan, particularly as a “learner battery” that the beginner often murders. Lifespan on these batteries can be maximized by cycling lightly, perhaps 20% depth of discharge. Pro: Local and 24hr availability in stores can be valuable. Warranties are nationwide; save your receipt as it is usually required. Con: Significantly less capacity than a real deep cycle bank; a group 27 wally world battery has about 1/2 the Ah capacity. Drastically reduced longevity when cycled to 50% DoD as with most campervan usage patterns. ===== lithium chemistries ===== Lithium battery banks are lighter and have higher energy density than lead-acid batteries. The main drawback is price. Lithium banks come in three main forms: * “drop-in” batteries that are the same size and general voltage range as the lead batteries they replace. Example: Battle Born BMS is built in. * DIY banks, often “bare” cells 3.2v cells in 4S configuration, with or without BMS. These are not the same size or shape as lead batteries * manufactured complete banks that do not mimic the physical shape of lead batteries ==== BMS ==== Because of the very high energy density and sensitivity to temperature and voltage extremes, most Li banks are equipped with a Battery Management System (BMS) which monitors and controls the bank and the cells in it. Depending on the BMS, features may include: * protection from overcharging individual cells * “top balancing” cells, getting cell voltages to match when fully charged * protection from over-discharge * protection from excess current in charging and/or discharging * prevention of charging when temps are too low35) ==== LiFePO4 ==== 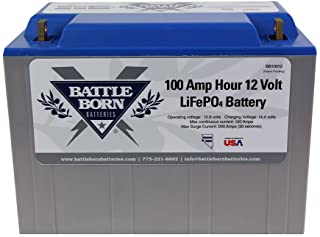 In theory LifePO4 (LFP) lithium batteries should be near perfect for boondockers who follow good weather. Battle Born presently dominates the drop-in 12v lithium market. Pro: * can accept significant current throughout charging, unlike lead-acid which accepts relatively current during absorption. * can be cycled down to 80% depth of discharge compared to lead-acid's 50%. * higher number of rated cycles than lead-acid, perhaps 2000.36) * half the weight, smaller size * no mounting restrictions * no venting required * not rated over 20 hours like lead-acid; LiFePO4 Ah are rated at .5C.37) * 4S LiFePO4 cells are a good fit for nominal 12v systems. They are fully charged at ~13.8v and 80% discharged around 12.6v. Con: * much more expensive * cannot be charged below freezing (use is ok) * can be damaged by heat BMS-equipped LFP banks should be charged according to manufacturer's specs. Bare cell charging is discussed on its own page. Further reading: * Synopsis of Cruisers and Sailing forums' LiFePO4 thread. * CF LiFePO4 Batteries: Discussion Thread for Those Using Them as House Banks * CF LiFePO4 batteries * CF LiFePO4 house batteries ==== Non-LiFePO4 lithium-ion ==== Non-LiFeP04 Li-ion [called “li-ion” hereafter] are usually built in 3S configuration and so run lower voltages than LFP or lead. Usable cell voltage is 4.2v - 3v, yielding bank voltage of 12.6v - 9v.38) This lower voltage may trip Low Voltage Disconnect on inverters or refrigerators. There are hobbyists who build 4S packs and undercharge the cells to only 3.7v. This gives an operating range of 14.8v - 12v, a much better fit for nominal 12v systems. The downside is this configuration only uses 58% of the cells' capacity and will require more cells to achieve the same amount of Ah. The cells could be fully charged then the output regulated back to more normal 12v voltage ranges. 7S builds make a decent 24v bank. They are 29.4v fully charged and 21v discharged, compared to lead acid's 29.6v max voltage and 24.2v 50% DoD cutoff. Discharging 7s li-ion to 24v((3.42v/cell) could help avoid LVD, making 35% of the cells' capacity unusable. 24v banks in general could preclude alternator charging, however. Pro: * About half the cost of LFP for the same Ah capacity * widely available Con:**