Since there is no water available, you will need to plan ahead.

Since there are no trash receptacles, you will need to manage your trash. There are typically no toilets.

When camping in areas that forbid firewood collection, park well away from fire rings. Nails may be present from the burning of wood pallets.

At some times the areas may be overrun by weekenders: 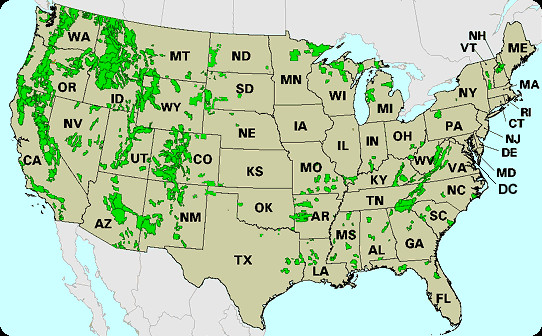 Reguges managed by the US Fish and Wildlife Service may allow dispersed camping6). Some are day-use only or are accessible by foot only. There are often additional rules in place to protect wildlife. This example is from Kofa:

Campers may select their own campsites and are limited to camping 14 days in any 12 month period. Camping within one quarter of a mile of water is prohibited by Arizona state law. All vehicles must remain within 100 feet off of the road. Campfires are allowed but only dead, down, and detached wood may be used. Uprooting dead stumps, trees, and bushes is forbidden. In addition, dead wood may only be collected from areas on the refuge that are not designated as wilderness. Please consider bringing your own supply of wood as wood is very scarce.7)

In some BLM areas (like those around Quartzsite) a free permit is required; it will show the date range you are allowed to stay. In other areas the length of stay may be on the honor system, spot-checked by rangers. Sometimes rangers drive by, noting vehicles or photographing plates. If they see the same vehicle after the allowed number of days they know that camper is violating the rules. If the ranger makes only one drive by he might ask questions about how long you've been there and when you intend to leave. You may want to have some supporting evidence for the duration of your stay: