Camping stoves come in two basic types: propane (or sometimes butane) or liquid fuel. They are usually single burner units although dual and even triple “suitcase” stoves are available.

Liquid-fuel pressure stoves run on compressed liquid fuel of some kind, traditionally Coleman fuel or unleaded. They were the default stoves for decades before the rise of propane. Pressure stoves typically cost less to run1), put out more BTU in a smaller package. The tradeoff is smellier fuel than propane and more complexity than the “turn the knob and light a match” starting procedure seen in propane gear. Liquid fuel stoves are generally not used indoors – they flare during startup, and emit fumes strongly when starting or extinguishing.

There are other, sometimes more exotic fuels often used used by backpackers who watch their grams. 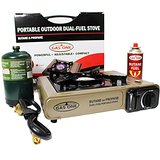 Countertop stoves have short feet or a flat bottom and fare best on a table, counter, or other wide/flat surface. They are stable in use and are much akin to using a hot plate. 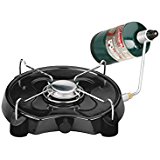 Since countertop stoves are relatively wide some 'dwellers opt for slimmer camping models. 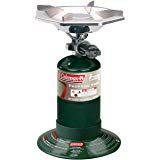 “Bottletop” propane camping stove burners mount directly to the top of the 1# bottle. This makes for light weight and easy storage, but can also be top-heavy and unsteady. Even so, these stand-up stoves by Coleman and others are quite popular. The Martin stove out of Canada is reputed to have the highest quality valve and burner.

There are also ultralight stoves for isobutane containers, but the fuel is expensive so they are most often used only by hikers and backpackers for whom light weight is more important than fuel cost.

Liquid fuel pressure stoves do not burn liquid fuel directly; they gasify (atomize) the liquid fuel into a vapor that the stove can burn efficiently. Gasification occurs in a gas generator, which is a portion of the fuel delivery tube that pass near or through the burner's flames. The liquid fuel hisses as it vaporizes in the generator.

Until the generator is hot enough to gasify the fuel, the stove will flare up, generally misbehave, and smell strongly of fuel. This can be alarming to first-timers, and may be responsible for the overall decline in pressure stoves in the camping stove market. Flare up can be minimized by pre-heating with alcohol: a bit is poured on the burner area near the generator and lit on fire. Just before the alcohol fire is goes out the liquid fuel valve is gently opened. This technique is especially helpful in very cold ambient temperatures where the flare-up could last a while.
Lighting demo (youtube)

Skeleton stoves can be more squat and steady as they don't have to work around the inherent height of the propane or liquid fuel bottle.

Pro: The Dragonfly pictured above is known for simmer regulation. Field maintainable and repairable. Some people like the sound.
Con: Cost about 2x as much as a non-skeleton regular pressure stove. This type of “roarer” stove can be quite loud.

Note that some compact sporster stoves can overheat their fuel tank if too wide a pan is used:

It affects any stove that has the burner and fuel tank close to each other, which is common in small, portable, or backpacking singleburner stoves. The reason wide pans are deprecated is that they reflect more heat back onto the tank/font. Taller, narrower pots will help the stove run cooler if it is prone to overheating.3)

Suitcase stoves have two or more burners and are shaped like a suitcase.4). Because of their large size they are uncommon in the vandwelling world. 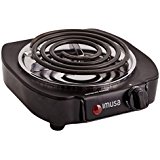 Electric stovetops are generally used by folks who use campsites with electric hookups, although generator or big solar setups with lithium banks are sometimes used.

Resistance and induction cooking both use 1000-2000w watts of power to run each “burner” although the induction unit will be ~12% more efficient.5)

Induction power levels have been measured for the following units:

Alcohol stoves are found in open, low-pressure, and high-pressure configurations – the latter is rare except for marine applications.

Low pressure stoves may be:

The most common commercial alcohol stove is the Trangia type: a freestanding, low pressure, double-walled stove that holds about an ounce of fuel.

The simplest hiking stove is a “penny” alcolhol stove, so called because in some variants a penny is used to cover the fill holes.

The simplest stove is a cut-out tin can, often called a “twig” or “hobo” stove.

In real world terms this means less smoke and more heat for a given amount of fuel. The camping versions also run quite well on small “scrap” fallen wood like bark freagments, twigs, chunks of partially burned wood, etc.

from most cheapest/BTU to most expensive:

The amount of fuel consumed can be reduced if needed: