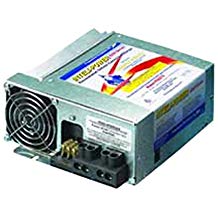 A converter (a.k.a. converter/charger) handles power and charging needs when connected to shore power:

OEM converters generally do a good job of providing 12v to the house. They can do this even if the battery is absent or dead. All the RVer has to check is if the converter Amperage rating is sufficient for present needs.

Note: if you have sufficient solar to complete Absorption then a “dumb” converter can work fine and shore power will support the battery on subsequent days. In this model the converter + solar would contribute up to Vfloat, then solar would raise the bank to Vabs and fall back to Vfloat when Absorption is done. Shore power holds Vfloat indefinitely thereafter.

Some single-stage converters allow the user to configure the float voltage, typically somewhere between 13.2v - 13.8v. If the converter does not allow this adjustment then pick one with an appropriate float voltage (Vfloat) for your battery bank.

Three converter makers are generally respected on the CRVL forum. In alphabetical order:

Although WFCO converter upgrades are most often seen on youtube, the videos might best be used for install walkthroughs rather than product choice.

SternWake says he leans toward Progressive Dynamics “for the ability to choose stages, holding 14.4 for 4 hours at the press of a button”3)

When bulk charging is handled by other means a small (10-20A) smart charger/maintainer may be sufficient. They are generally not intended to be permanently mounted in the vehicle so mounting may have to be fabricated, or storage found for it when not in use.

“Dumb” converters output a single voltage and work fine when solar charging is present (see above). In this scenario the 12v power supply can is set to ~13.x voltages to provide “float” support while on shore power.

It is possible to build a DIY converter from a power supply and MPPT charge controller.