“Three stage chargers are easier on your batteries, charge them faster, fuller and help you use less water”1) – HandyBob

A [ shore power ] charger is a stiff source with unlimited energy and time. Your solar is a very soft source of unknown power and only a few hours to get the job done. - sunking2)

Charging lead acid batteries is not something that you decide to do, or start or stop. The old statement, “I need to idle the engine for a few minutes to “top off” the batteries.” is a prescription for turning expensive batteries into paper weights. You want a system that puts the batteries on charge automatically, every time there is even a single ray of sun or that your engine is running – DiploStrat3)

Solar charging setups cannot charge at night so the most extreme Depth of Discharge typically occurs just before sunrise. The battery bank must be brought to full charge as soon as possible, both to enhance usability and the health of the batteries. Full charge means charging to the battery manufacturer's specification. It is not a guessing (or hoping) game.

“High amps in the morning when most depleted, and enough solar (hopefully more than enough) to reach and hold absorption voltage all afternoon = happy long lived batteries” – Sternwake4)

In general, manufacturers of flooded lead chemistries specify charging at C/10 to C/5; this assumes more charging time than solar power allows.5) AGM are typically charged at C/5 to C/3. There may not be a practical maximum charging rate for cycled FLA batteries when charged from solar. As Sternwake put it when describing a C/1.5 (!) charging scenario, “solar is not instant max output.”6)

Three stage7) or “smart” chargers (whether solar charge controllers or converters) will follow a common pattern. Battery manufacturers publish specs for charging and a good charger will let the user configure the charging stages in accordance with that information. Less-expensive chargers may have presets for charging different battery types; if you get lucky one of the presets will match your manufacturer's charging recommendations.

This graphic10) shows how current and voltage change during the full charge: 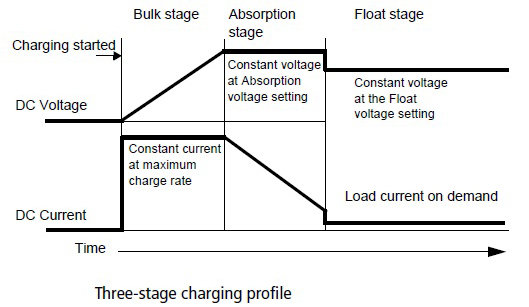 Charging won't be as neat as the graphic due to varying solar harvest, varying loads, etc. In practice “constant current” means “as much as your solar can produce”. Generators and shore power charging will usually be able to hold a steady level of current.

The bulk stage is a fast and furious rush to get maximum power12) returned to the battery bank. Since the stage by definition requires all the power the system can generate13), this is when controllers typically get the most benefit from MPPT features.

Note: this is the stage where it is most useful to charge the bank with a generator or alternator. After bulk charging is complete the current required begins dropping automatically and roughly linearly.

The absorption stage, sometimes called acceptance14) or boost15), is a constant voltage stage during which the battery is brought to full charge. This stage requires a great deal of time but decreasing amounts of current.

Example: if you have a 100Ah battery bank and the manufacturer states that endAmps is C/100, then the battery is fully charged when it is only accepting 1A of current16) at Vabs. An endAmps recommendation of C/200 would be the battery accepting 0.5A of current.17) at Vabs.

In practice absorption takes longer when the battery has been discharged deeply and shorter when it has not.18)

Solar-only charging at lower current levels may indeed mean 80% of the amps are replaced at the end of Bulk.20)

If your charge controller only holds [absorption] voltage for an hour or two, that is likely not enough time. As long as [there is a load] and you cycle the battery daily, you could set float voltage to [absorption voltage] without worry. Only when you stop cycling the battery do you need to return float voltage to more regular 13.2v21) levels. Premature application of float voltage by automatic charging sources is a battery killer.22)

If Absorption cannot be completed in the max amount of time configurable in the controller (due to damaged/old batteries), charging at the minimum rate and/or at higher voltage may help compensate.

The float stage is not a charging stage but rather a maintenance stage.23) In it the battery is fed just enough current to hold the battery at a full charge. The battery will remain fully charged indefinitely in Float; it does not overcharge.

Charging can be applied24) with a simpler methods like charge-and-hold where the charger has a single setpoint which it holds; current will drop as the battery accepts less.

Lithium packs don't need Absorption or Float stages in the lead-battery sense but those voltage setpoints can be put to good use. Follow your Li battery mfg's advice on charging.

Sometimes called the fourth stage, “equalizing is an overcharge to stir up electrolyte in stationary deep-cycle flooded/wet batteries.31) Since most vandwellers are mobile and electrolyte gets agitated by the van's movement EQ may not be required for vandwellers. Information provided below for completeness.

An equalizing charge prevents battery stratification and reduces sulfation which are leading causes of battery failure. Trojan recommends equalizing every 30 days or when batteries have a low specific gravity reading after fully charging… Deep-cycle AGM or gel batteries should NEVER be equalized.”32)

Accurate charging requires the charger know the temperature of the batteries being charged. In hot temps a full charge will require somewhat lower voltage. Cold temps will require higher voltage33), enough to trip overvoltage protection in some 12v gear. 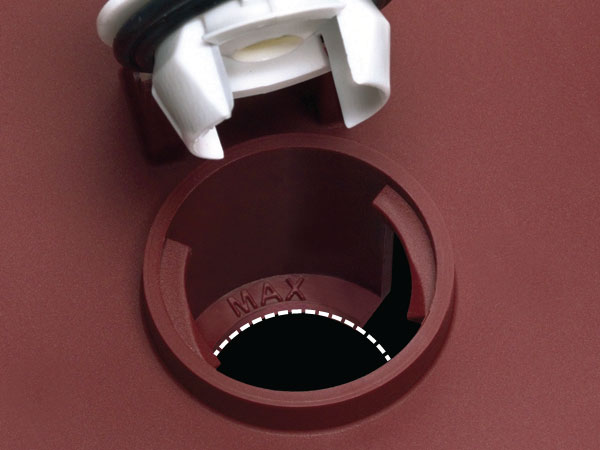 Flooded lead-acid batteries outgas during Absorption, causing a slow loss of water.35) They outgas intentionally in Equalization. To counteract this, the 'dweller must remove the caps and inspect the water level. If low, distilled water is added.

Charging while using the 12v system

Example: a battery bank is in Float mode, 13.5v with minimal current, let's say 0.1A. A laptop charger is plugged in which pulls 3A. The controller will attempt to provide 13.5v at 3.1A. If it can do so the charger stays in Float mode. If it cannot hold that level it will drop back to Bulk stage.36) Morningstar explains it like this:

Mains automotive battery chargers, even smart ones, can get confused by load during charging.38)

If your battery does not come with charging instructions then you will have to figure out who actually made the battery, and follow their instructions:

Notice how your brand of battery is not listed? Batteries may be made to spec for the companies who label and sell them, or just standard batteries rebadged with sellers' branding.

The following data has been collected as an overview. Read the linked documents and make your own decisions rather than relying on the collection.

1) , 33)
https://handybobsolar.wordpress.com/the-rv-battery-charging-puzzle-2/
2)
https://www.solarpaneltalk.com/forum/off-grid-solar/batteries-energy-storage/299490-bulk-absorb-float-equalize-what-does-it-mean#post299490
3)
https://expeditionportal.com/forum/threads/dual-battery-system-with-ctek-d250-not-charging-battery-over-12-volts.174927/post-2342346
4)
http://www.cheaprvliving.com/forums/Thread-charging-from-alternator-effects-on-fuel-milage?pid=263792#pid263792
5) , 6)
http://www.cheaprvliving.com/forums/showthread.php?tid=23606&pid=288284#pid288284
7)
some mfg claim 4 or more charging stages, including equalization or proprietary stages. These three are the essentials.
8)
Vabs, absorption voltage
9)
http://www.cheaprvliving.com/forums/Thread-Can-a-solar-panel-and-charge-controller-over-charge-a-battery?pid=96956#pid96956
10)
from an unknown Amazon seller
11)
http://www.trojanbattery.com/BatteryMaintenance/Charging.aspx
12)
or max recommended power
13)
up to the battery bank's ability to accept it
14)
which makes sense
15)
doesn't make sense!
16)
100Ah/100 = 1A
17)
100Ah/200 = 0.5A
18)
http://www.cheaprvliving.com/forums/Thread-Can-a-solar-panel-and-charge-controller-over-charge-a-battery?pid=96965#pid96965
19)
https://marinehowto.com/how-fast-can-an-agm-battery-be-charged/
20)
An extreme version of this would be older converters that charge only at Vfloat – all the amps could be replaced given enough time.
21)
for example - secessus
22)
http://www.cheaprvliving.com/forums/Thread-Solar-or-Battery-Problem?pid=229883#pid229883
23)
insert holy war here
24)
with variable amounts of success
25)
minimum current of C/5 up to C/3
26)
http://www.cheaprvliving.com/forums/Thread-anyone-familiar-with-Worker-AGM-batteries?pid=97068#pid97068
27)
due to speedier Bulk charging
28)
there are exceptions
29)
lower-voltage cells are given a chance to rise to their proper individual voltage of 3.45v
30)
the cells degrade faster at 100%+ SoC
31)
the electrolyte may stratify in stationary batteries, resulting in zones of stronger and weaker acid
32) , 34)
http://www.trojanbattery.com/pdf/TrojanBattery_UsersGuide.pdf
35)
AGM and other VRLA outgas to, but use recombination to remake water from the gases
36)
it cannot “drop back” to Absorption since Vabs is by definition higher than Vfloat
37)
http://www.morningstarcorp.com/lead-acid-batteries/
38)
http://www.cheaprvliving.com/forums/Thread-Do-I-have-to-disconnect-my-converter-when-charging?pid=148653#pid148653
39)
resting voltage
40)
internal resistance
41)
https://www.businesswire.com/news/home/20170215005980/en/Top-5-Vendors-in-the-Global-Deep-Cycle-Batteries-Market-from-2017-2021-Technavio
42)
controllers without external temp sensors are measuring controller temp
43)
https://www.crownbattery.com/hubfs/Downloads/Safety.First.Deep-Cycle-Batteries.pdf
44)
up to C/4 for CR235, see https://www.altestore.com/static/datafiles/Others/CR-235%20PowerSheet.pdf
45) , 47)
15%
46) , 50)
30%
48)
much higher than usual
49)
30%, for “maximum lifespan”, somewhat lower than usual
51) , 52)
13%
53)
https://www.usbattery.com/wp-content/uploads/2014/05/usb-charging-recommendations.pdf
54)
http://resources.fullriverbattery.com/fullriver-battery/charging-instructions/batteries.pdf
55)
https://www.cruisersforum.com/forums/f14/duracell-gc2-charging-specs-163920.html#post2092450
56)
https://www.eastpennmanufacturing.com/wp-content/uploads/Renewable-Energy-Charging-Parameters-1913.pdf
57)
.3C
58)
https://www.continentalbattery.com/assets/Odyssey_Owners_Manual.pdf
59)
https://www.odysseybatteries.com/odyssey/docs/us-ody-tm.pdf
60)
actually 40% of C/10 rate
61)
https://forum.solar-electric.com/discussion/comment/274935#Comment_274935
62)
https://www.interstatebatteries.com/support/golf-cart-battery-installation-and-maintenance
63)
.13C
electrical/12v/charging.txt · Last modified: 2022/01/11 16:38 by princess_fluffypants