For various reasons it will be a rare event when your panels put out their full rated power. One reason for this is the power needs somewhere to go; unless you are in Bulk stage or are running big loads the power isn't needed so the power isn't generated.

The other big reason is that power ratings are derived from testing under specific lab conditions. The standard lab test is at:

Long runs of wire between the panel and controller can result in losses that make the panel appear to be putting out less power. In reality, the lost power has been converted to heat3) in the wiring. Solutions:

The sun will climb in the sky until it reaches its highest point for the day (local solar noon), then will start dropping again. For a given latitude and time of day the sun's location in the sky is calculable and can give you the cosine of solar zenith angle (“cosine” hereafter).4). You can use the cosine to understand how much power your system might put out.

Insolation5) is the the amount of solar power reaching the panels. This can be affected by:

This means any power generated at very low levels of insolation10) will likely be trivial. Increasing panel Voc to try to get more power in marginal conditions may not be effective. Consider overpaneling instead.

Insolation maps attempt to combine the effects of the variables above to estimate hours of full sun11) equivalent (FSE) per day.

Some conditions can cause an effective magnification of solar power, the opposite of shade in a way. This is usually caused by reflection of previously-uncaptured light onto the panels – the panels are receiving both normal direct light and the additional reflected light at the same time. Since panels are rated at a lab standard 1000w/meter2 , this multiplication of available light can cause the panels to make more than their rated power, and can cause Voc to rise beyond rated specs.

Insolation figures are given for flat surfaces13) but you can increase yield by keeping the panel more perpendicular to the sun. The downsides are setup and takedown time/effort, and (with van-mounted panels) the requirement to park the van at a particular angle in the campsite. Tilt might be more practical for people who stay in one place for longer periods rather than moving every couple of days.

Optimum aiming involves both tracking the suns elevation above the horizon (zenith) and tracking the sun's east-to-west travel (azimuth). Doing both can increase yield ~30% but requires frequent repositioning.

Leaving panel tilt in a reasonable default is more common and has milder yield improvments. In this approach the panel is aimed at true14) south15) at a particular angle from perpendicular16) depending on time of year and latitude. 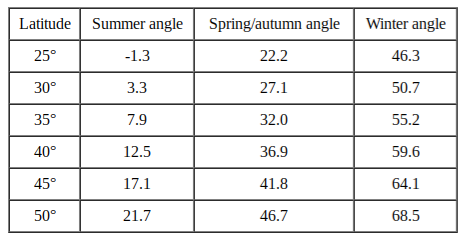 According to Sandia lab testing, dusty panels cause a derating of about 5%.17)