The bottom line is that current simply flows where it is needed, batteries will take what they need when batteries are combined, and the voltage becomes equal among the new combined bank. Unless your charger, alternator or solar/wind system is pumping out an incorrect voltage for you bank you will not over charge using an ACR. mainesail2)

In a dual-battery system3) some of the alternator output is used to charge the house batteries when the engine is running. When the engine is not running the house battery is electrically isolated from the starter battery to keep from draining it and leaving you stranded. So the devices that handle the isolating/combining duties are called battery isolators. There are several different types.

Normally only the POS4) wire is used to route power with an isolator; the NEG side is the chassis ground. If no chassis ground is available a NEG wire will need to be run also.

Alternator charging is generally only practical for the bulk charge stage due to relatively low voltage output and the long time periods required for absorption.5) It is unlikely to get lead-chemistry batteries fully charged unless one is driving for several hours. Failure to fully charge lead batts regularly6) will impact battery longevity. If one drives often a combination of the alternator doing bulk charging and a small solar doing the rest is good match.

Vehicles with smart (variable voltage) alternators may not be suitable for charging with normal isolators.7) See below. 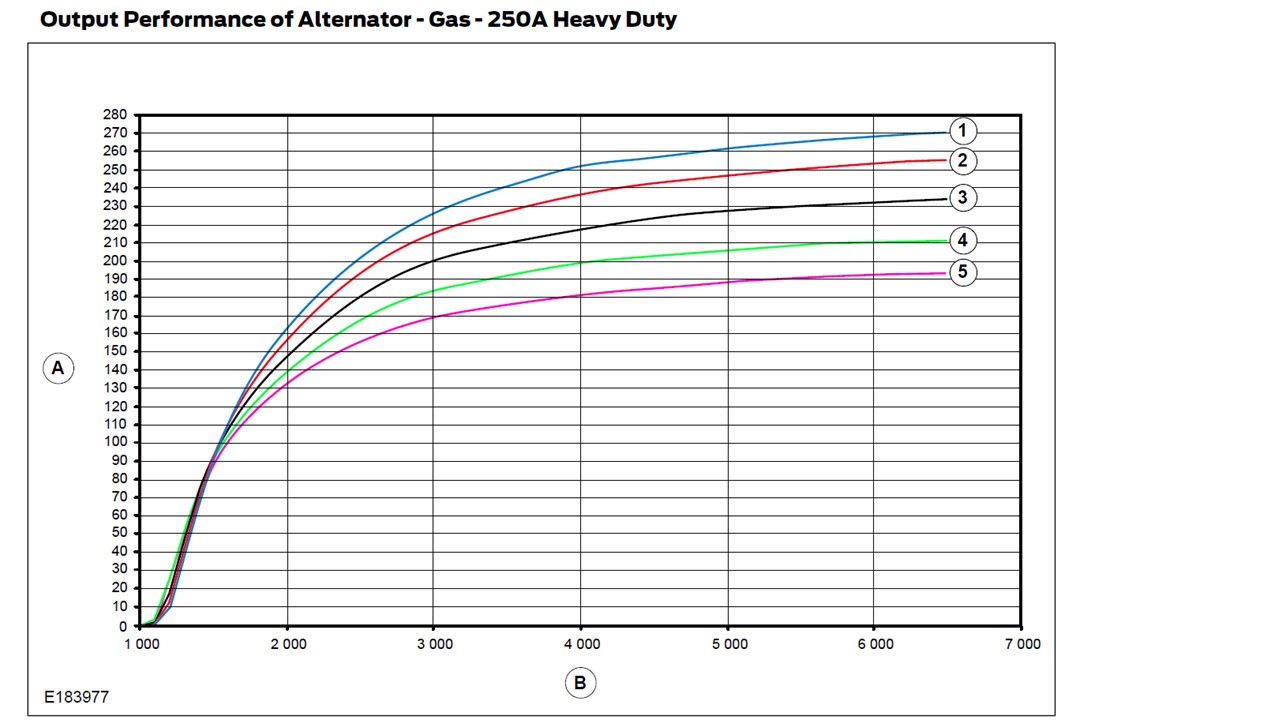 Charging the house batteries from the alternator increases the load on the alternator and can be expected to contribute to somewhat earlier failure. In practice it's usually a non-issue if one avoids overheating8) or overloading9) the alternator.

If/when the OEM alternator does fail10) a higher output one can be installed for not much more than it would cost to replace the original.

SternWake reports idling while charging causes a sharp increase in alternator temperature.11) To avoid this, do your alternator charging while driving so airflow over the hot alternator will help cool it.

Alternators put out their rated current at higher RPM. See chart on the right for a Ford Transit 250A alternator.

High-performing engines with Gasoline Direct Injection can experience carbon fouling on the backside of intake valves, which can cause “drivability woes… misfires” and dislodged carbon flakes can cause “turbocharger issues… catalytic converter damage.”12)

Anecdotally the problem appears to be worsened with excessive idling, although this may be a subset of situations where “the engine doesn’t run long enough or hard enough to get hot enough to burn any of the carbon off.”13)

Traditional alternators typically try to hold a set voltage. Smart alternators talk to the vehicle's ECU (compuuter) and can vary output voltage wildly depending on present conditions. It might unload the alternator during heavy acceleration to reduce parasitic losses, or run the alternator at high voltage just after starting to speed up the recovery of used energy.14)

The use of plain isolators with smart alternators may result in the rapid cycling of the isolator's circuit (with voltage sensing types) or the discharge of the house battery into the starter battery (solenoid type).

A constant-duty solenoid is an electromechanical device which uses an electromagnet to complete the charging circuit when the engine is running. Solenoids are generally cylindrical. Energizing the solenoid will cause a 0.5A - 1A current drop between the alternator and house battery. Exception: Latching isolators use latches15) instead of electromagnets to hold the circuit closed, eliminating that vector of power consumption.

16). SternWake recommends the Blue Sea 901217) although non-marine units in the $20-$50 range are more common in vans.
Solenoids can be used for self-jumpstarting if the chassis battery has enough juice to engage the solenoid. 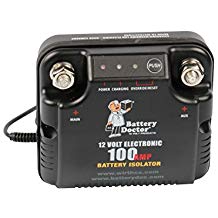 voltage sensing relays (VSR, also called Automatic Charging Relays or ACR) are solenoids with a bit of extra logic to know when to connect/disconnect. The VSR does not get trigger voltage from the fuse panel but rather reads the voltages of one18) or both19) batteries to know when to switch on.
This kind of isolator may have a “combine” override function to enable self-jumpstarting.

Note: voltages-sensing (with or without delay) can be added to plain solenoids.

These isolators are electronic devices which use diodes to prevent depletion of the starter battery. Isolators are generally brick-shaped. Diode-based isolators have a 0.5v - 1v drop between the alternator and house battery. This may be desirable if the house battery is a wants lower-voltage charging like LiFePO4.

This type of isolator is similar to the diode-based one above, except that FET components are used instead of diodes, minimizing voltage drop. They tend to cost 2x as much as the diode versions.

The Precision Circuits Li-BIM is a lithium-specific isolator with some differences:

The unit supports self-jumpstarting but a switch must be installed by the user. 160A and 225A models are available. BB suggests the BIM is recommended for lithium banks >= 300Ah.24)

The Mastervolt Charge Mate Pro 90 is an electronic current-limiting isolator.

If an isolator is oversized it will cost more for no benefit and will self-consume somewhat more energy to hold the combining circuit closed.25)
If an isolator is undersized (less common) it will not be able to carry enough current, resulting in overheating and/or sudden shutdown.

Lithium in particular has low internal resistance and can pull 1C (100A for an 100Ah bank) or more. Victron posted a video showing it is possible to “smoke” an alternator while charging lithium. Since lithium does not care much about state of charge, there is little reason to go for maximum force lithium charging. Some Li bank owners use DC-DC isolators which limit themselves to a particular output (20A, 60A, 100A, etc).26)

Reasonable charging rates can also be easier on the alternator when charging suddenly stops, whether by completion27) or BMS intervention. Blue Sea makes an alternator field disconnect which shuts down alternator power just before disconnecting the load, but this may be chiefly applicable to marine alternators. Others have discussed installing a small lead-acid battery parallel to the Li bank; in theory this could soften the blow from Li leaving the circuit. Other sources suggest the presence of the starter battery would be sufficient.28)

Example: a 200Ah FLA battery bank will pull up to 40A29) in Bulk charging. An isolator rated for constant duty at 40A30) would be sufficient.31)

The existence of the starter battery should attenuate the problem but keep the issue in mind.

The average user will likely not notice these effects; some of them rather subtle.

2 gauge copper wire connecting the coach and house is recommended for most alternator charging installs. SternWake recommends attaching at the alternator rather than the battery.38)

Note that you will only have to run the POS+ leg of wire to the house battery as the chassis ground is usually the other leg.

A simple possible approach would be to replace the starter battery with a marine or AGM battery.40)

Some amount of power can be passed along the 7pin harness, usually enough to maintain the trailer battery's voltage and run small loads. For the purposes of this discussion the important wires in the 7-pin are:

The minimum size for these wires is 12ga and some heavier models use 8ga.

Given: a 3% maximum voltage drop42) and a 40' round-trip wiring run from alternator to trailer battery we can provide Float voltage to the trailer battery at these rates:

A configurable DC-DC charger might be able to pass high enough voltage to overcome sag. If the 7-pin is the conduit then we are still limited to the currents listed above.

More power (and more appropriate charging voltages) can be passed along the 7-pin by injecting higher voltages into the harness.43)

Using 12ga wire as an example, 5A @ 13.6v = 68w. After the same 3% voltage drop and MPPT conversion losses the boosted setup would deliver 166w, and be able to “smart charge” the trailer battery at appropriate voltage.

It's also possible to run a separate and heavier cable from the TV to the trailer; this would minimize voltage sag. If a plain isolator is used with heavier wiring the voltage will still be insufficient to fully charge lead batteries.

Heavier cabling + a DC-DC charger could provide correct voltage to the trailer battery.

1)
http://www.cheaprvliving.com/forums/showthread.php?tid=26877&pid=337117#pid337117http://www.cheaprvliving.com/forums/showthread.php?tid=26877&pid=337117#pid337117
2)
https://www.cruisersforum.com/forums/f14/agm-battery-failure-two-sets-in-two-years-239438-7.html#post3229546
3)
starter battery and house battery
4)
+, positive
5)
DC-DC chargers can help with the voltage
6)
daily is ideal
7)
https://www.redarc.com.au/how-do-i-know-if-i-have-a-variable-voltage-smart-alternator
8)
as when idling
9)
as with giant AGM or lithium banks
10)
all alternators have a non-infinite lifespan, not just ones used to charge aux banks
11)
http://www.cheaprvliving.com/forums/Thread-Longer-alternator-life-when-used-to-charge-house-batteries?pid=182096#pid182096
12)
https://www.autoguide.com/auto-news/2015/01/is-carbon-buildup-a-problem-with-direct-injection-engines-.html
13)
https://automotiverepairphoenix.com/ask-car-guy-can-carbon-build-impact-engine/
14)
https://www.redarc.com.au/alternator-vs-fixed-alternator
15)
surprise!!!
16) , 17)
http://www.cheaprvliving.com/forums/Thread-Questions-about-continuous-duty-solenoid?pid=229761#pid229761
18)
VSR
19)
dVSR - d is for dual
20)
https://marinehowto.com/automatic-charging-relays/
21)
bonus points to the Jaycorp for printing the connect/disconnect setpoints right on the isolator!
22)
also see Li-BIM below
23)
https://www.sbmar.com/articles/how-to-install-a-diode-isolator-with-an-alternator/
24)
https://sprinter-source.com/forums/index.php?threads/68203/post-762424
25)
an electromagnet holds the parts of the active circuit together. When power to the inolator input is cut the electromagnet can no longer hold the circuit closed. The circuit is open and the batteries are isolated from each other.
26) , 28)
https://shop.pkys.com/Alternator-Lithium-Battery.html
27)
same reason headlights are turned on at the donor car when jumpstarting
29)
200Ah/5
30)
likely with peak tolerance of 60A or so
31)
assuming you aren't applying heavy loads like a microwave while driving
32)
100A peak
33)
including a charging battery
34)
dVSR
35)
both VSR and dVSR
36)
ie, do not leave in the Accessory position which would drain the starter battery
37)
https://www.victronenergy.com/upload/documents/Datasheet-Cyrix-ct-120A-230A-EN.pdf
38)
http://www.cheaprvliving.com/forums/Thread-Charge-house-batteries-with-DC?pid=110652#pid110652
39)
http://www.sterling-power-usa.com/library/What%20is%20an%20alternator%20to%20battery%20charger.pdf
40)
http://www.cheaprvliving.com/forums/Thread-Easiest-simplest-cheapest-power-set-up
41)
negative return
42)
14v at the alternator and 13.6v at the battery
43)
disregard the relay complication; you can use a toggle switch if desired
electrical/12v/alternator.txt · Last modified: 2021/12/31 13:51 by frater_secessus