Words of wisdom: “In theory, Imp * Vmp = panel Watts. There's an awful lot in the real world that can affect that.” – Cariboocoot1)

For various reasons it will be a rare event when your panels put out their full rated power. One reason for this is the power needs somewhere to go; unless you are in Bulk stage or are running big loads full power isn't needed so full power isn't generated.

The other big reason is that power ratings are derived from testing under specific lab conditions.2) The standard lab test is at:

Because the difference between lab and actual conditions is so large, some manufacturers also publish NOCT4) specs, a derated (lowered) set of specs which might or might not be more indicative of what you will see in your use case. NOCT is another tool in the toolbox, not gospel truth.

In practical terms, it's common to see a maximum of 75% of STC under good conditions, more under great conditions, and much less under poor solar conditions.

Solar panels do not push power; they respond to the solar charge controller's demand as it tries to meet your present needs. When those needs are minimal (battery already charged, small loads) the controller and panels will be loafing.

Related: is my solar working?

Perhaps counterintuitively, setups with ample panel may see lower peak outputs than smaller setups. This occurs because the overpaneled systems can get the bank charged before local solar noon when maximal harvest can be observed. This is a feature, not a bug. Overpaneled systems are built to meet needs under less-than-optimal conditions. If you want to see Big Numbers, start a huge load at local solar noon under good solar conditions.

Long runs of wire between the panel and controller can result in losses that make the panel appear to be putting out less power. In reality, the lost power has been converted to heat6) in the wiring. Solutions:

Note: sub-freezing temperatures can push Voc/Vmp above their rated values. If you will use solar in sub-freezing conditions leave plenty Voc headroom in your solar charge controller spec.

The sun will climb in the sky until it reaches its highest point for the day (local solar noon), then will start dropping again. For a given latitude and time of day the sun's location in the sky is calculable and can give you the cosine of solar zenith angle (“cosine” hereafter).7). You can use the cosine to understand how much power your system might put out.

Tip: you can work backwards from cosine calculations and observed power harvests to find your system's overall efficiency in different conditions.

Insolation8) is the the amount of solar power reaching the panels. This can be affected by:

Even the altitude and type of clouds can affect harvest:

in addition to total sky cover, cloud type is a significant factor in determining the reduction in solar radiation. In particular high, thin cirriform clouds are significantly less effective in reducing solar radiation than are lower, thicker clouds.13)

This means any power generated at very low levels of insolation14) will likely be trivial. Increasing panel Voc to try to get more power in marginal conditions may not be effective. Consider overpaneling instead.

Insolation maps attempt to combine the effects of the variables above to estimate hours of full sun15) equivalent (FSE) per day. 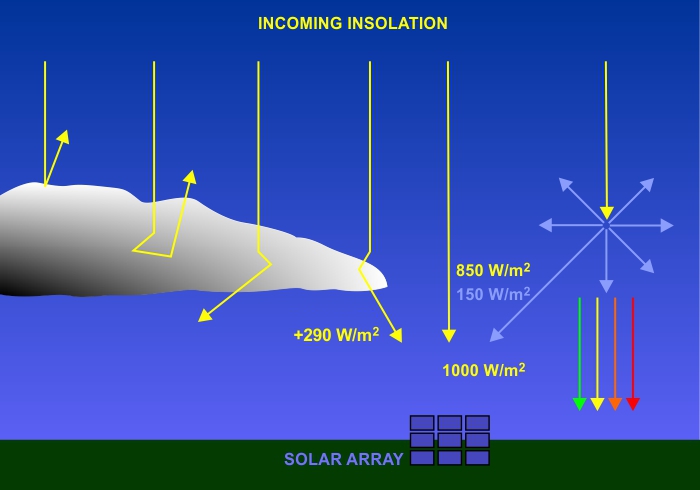 Some conditions can cause an effective magnification of solar power, the opposite of shade in a way. This is usually caused by reflection of previously-uncaptured light onto the panels – the panels are receiving both normal direct light and the additional reflected light at the same time. Since panels are rated at a lab standard 1000w/meter2 , this multiplication of available light can cause the panels to make more than their rated power, and can cause current and/or voltage to rise beyond rated specs.

Insolation figures are given for flat surfaces17). This means when the sun is low in the sky18) you may be able to increase solar yield by tilting the panels toward the sun. In effect the panel is more perpendicular to the sun so it can capture maximal solar energy.

Optimum aiming involves both tracking the suns elevation above the horizon (zenith) and tracking the sun's east-to-west travel (azimuth). Doing both can increase yield ~30% but requires frequent repositioning throughout the day.

Leaving panel tilt in a reasonable default is more common and has milder yield improvments. In this approach the panel is aimed at true20) south21) at a particular angle from perpendicular22) depending on time of year and latitude.

According to lab testing, dusty panels cause a derating of 5%-6%.