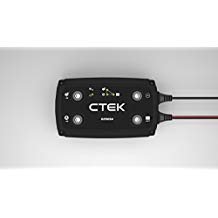 A b2b (or dc-dc) charger is a type of isolator that converts alternator voltage to specific voltage setpoints instead of just passing it through as a relay might.

Because of their electronic nature they are limited to a rated amount of current1) which can protect your alternator from damage. This can be especially important with Lithium and AGM batteries that can demand huge loads from the alternator when discharged.2)

Charger throughput is generally limited to 20-30A3) since higher rates would dictate $$$ internal components, whereas plain isolators might pass as much current as the alternator, battery, and wiring could handle. This isn't as big a limitation as it might seem since lead-acid current acceptance drops substantially throughout Absorption, and lithium owners often limit charging to C/5 for maximal longevity.

Untested theory: b2b chargers might work well beside normal isolators; this is essentially the $$$ CTEK SmartPass setup described below.

DC-DC chargers are often triggered by the IGN circuit, but voltage sensing can be added to that circuit. Others are triggered by chassis-side voltage alone.

DC-DC chargers typically do not support self-jumpstarting, although the need for jumpstarting may be reduced with combo units (below) that maintain the starter battery from solar power.

DC-DC chargers come in different ratings (10A, 40A, 60A, etc) which increase significantly in price as the rating increases. In general, the stated rating is on the output (battery charging) side. Some exceptions do exist; Sterling units are rated on the input (power taken from the alternator).6)

The DC-DC should be big enough to meet your charging targets given the amount of driving you do and the contributions of other forms of charging. It should be small enough that the alternator can provide the power continuously.

Isolated DC-DC chargers have negative terminals output side (battery bank) “galvanically isolated” from the input side (alternator). It is not needed for most use cases:

Generally speaking, one only needs to isolate the negatives when the installation does not share a common negative return path, such as may be the case on many fiberglass boats that don't have a chassis and may not have a common grounding bus to which all their battery banks connect. – Justin Cook10)

But note that a trailer does not always have common grounding:

Galvanically isolated is a nice thing to have, especially if you are charging house batteries in a trailer from the tow vehicle engine. The issue relates to how the house battery is grounded to chassis ground when the tow vehicle is disconnected. All in one RVs and vans don't have this issue (probably) so I would not expect them to need galvanic isolation. (emphasis added) – HaldorEE11)

Combining the solar charge controller and DC-DC charger in one unit can have benefits in cleaner/simpler installation, starter battery maintenance from solar, and perhaps cost over separate components. The downsides are less configurabilty12), single points of failure, and limited options on solar input.

Combo units typically have much lower maximum panel input voltages (as low as 23v) than a standalone charge controller would (60v - 150v). This limits the solar configuration in a few ways:

The most common b2b charger with 'dwellers is the D250 series, all of which are 20A smart chargers with integrated MPPT:

Note: the CTEK D250SA14) panel voltage (Vpanel) maximum is 23v.15) There are user reports that the unit is repairable after overvoltage or polarity damage.16),17)

The MPPT charger will charge the house battery at up to 20A. CTEK specifies 50-300W of panel, though the 23v Vmax limits the unit to nominal 12v panels. Note: polycrystalline panels may be more useful here, as their Voc should be a bit lower than mono.

The 250-series will charge simultaneously from solar and alternator up to the 20A output limit. No details are given in the manual.

The SmartPass accessory adds up to 80A-120A (see below) of alternator charging to the D250's output under certain conditions for a theoretical charging max of 100A-140A, depending on version:

The Smartpass is effectively an isolator (details here), which means it can only charge the house battery at alternator voltage.

The D250SA trickle charges the starter battery from a solar panel at intervals of 3 seconds if the service battery is fully charged.20)

Note: a 30A combo model is also available

This device's behavior regarding solar+alternator charging is widely misunderstood.

The 50A dual-input charger prefers to charge by solar if possible, up to 50A. If it cannot meet charging demands alone and the engine is running it will will charge up to 25A by solar and 25A by alternator:

Consider this snippet from the manual;

Using the above information and a theoretical scenario where we have 15A22) of solar charging available during the daytime, an alternator capable of delivering 50A, and a bank able to accept 50A of charging:

Note: some have reported better alternator charging performance with the D+ (smart alternator) wire connected, even with plain alternators. Oversizing cables from the alternator may also help. 23)

Kisae makes a DMT1230 DC-DC charger 30A charger with 50v MPPT input and 16v alternator input.25) They also make a 50A model (DMT1250), which charges up to 50A by alternator. Some sources give 50v as max input; check the current manual for your device. Both models list specifiy 500w of panel with up to 20% overpaneling (600w). The Kisae has a minimum solar input voltage of 14.5v. It can limit current output to a setpoint configured by the user, and drop to float based on trailing amps.

Given MPPT's DC-DC conversion we would expect >30A on the output. They do give an example of 500W practical input max with nominal 12v panels. If we use their 97% claim it would pass up to 485W. So if it charging at 13.0v we might see something like 37A. – secessus

By default, when the alternator input terminals detect at least 13.2v the charger will be switched to alternator charging.28) The unit can be set to prefer solar charging instead.

The Kisae does not appear to maintain the starter battery.

Redarc “dual input” DC-DC chargers have integrated MPPT controllers. They appear to do both buck and boost conversion as solar input voltage is 9v-32v.29)

The unit will always take as much power from the unregulated Solar input as it can before supplementing that power, up to the maximum rated output, from Vehicle power input30),31)

These units do not appear to maintain the starter battery from solar. Redarc does document how to insert a switched relay in between the starter and aux batts to self-jumpstart.

Note: the Ring appears very similar to the Kisae (above).

Max solar input voltage for all models is 36Voc. Minimum panel wattage is 50w-60w depending on model.

Solar can be prioritized over shore power charging. The Solar Operation section of the manual suggests that alternator charging has priority over solar. The default priority appears to be:

The starter battery will be maintained at ≤5A by solar or mains charging. Max input voltage is 32v.

Wagan sells 25A and 40A DC-DC chargers with MPPT inputs. The 32v max input and other specs suggest internals may be similar to Redarc units (see above).

The Sterling Pro Batt Ultra series can be configured to exact setpoints. The BB1260-12 is a 30A example and costs about $50 more than the D250S above. 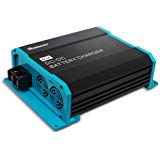 DC-DC chargers in 20A, 40A, and 60A output. Switched on by ignition circuit on the D+ port.33) DIP switches for battery type, Vabs and Vfloat. manual (pdf) teardown Note: some versions of the manual may have a typo.

These chargers appear to have a 3 hour absorption duration. This is usually insufficient for lead chemistries, but still longer than the 2 hour duration of the DCC series above. From the manual:

By default, absorption will not exceed 3 hours to prevent overcharging. 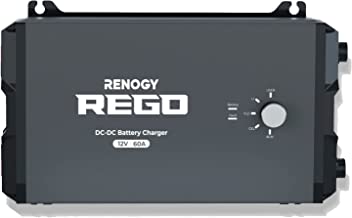 60A DC-DC with different form factor and a configurable USER profile. Important differneces from teh 1212 line above:

Redarc makes DC-DC chargers in 20A and 40A sizes.

Victron makes several DC-DC chargers, some of which are configurable by bluetooth. 12v examples:

Be aware the physical jumpers may have a specific orientation.

Bogart's SC-2030 can work as a DC-DC charger as well as a PWM charge controller.

Charging a 24v bank from 12v alternator is possible but gear selection is relatively slim.

Also see the Votronics section above for their DCC 25A 1224 charger.

DC-DC chargers are typically rated on their output power, which means they can pull more than their rating from your alternator. This could be a consideration if you are running a small alternator and relatively big DC-DC.
Example: Relatively low chassis voltage, 13.4v. Relatively high charging voltage, 14.8v.39). 50A output @ 14.8V requires 57.98A from the alternator after DC-DC boosting and losses.

Carefully observe voltage input maximums on units with built-in solar charge controllers. If you will be in freezing conditions allow headroom to account for the effects of temperature on solar cell voltage.

Voltage-sensing units40) can misbehave when an undersized starter battery charger/maintainer is attached. For this example we assume a 10A maintainer and a 20A DC-DC charger.

The workaround is to either charge the house battery first or to buy a big enough starter battery maintainer to support both the starter battery and DC-DC charger loads.