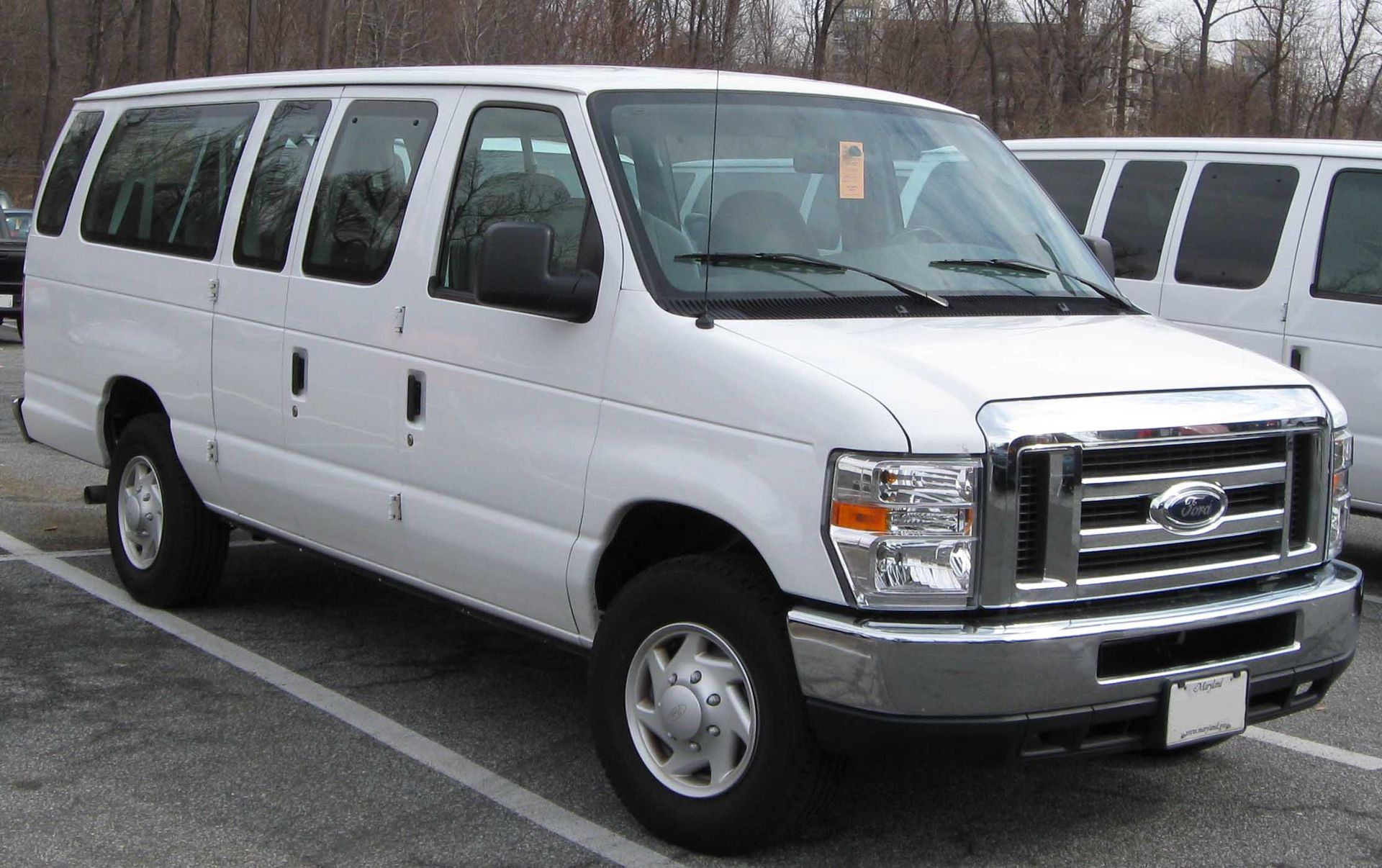 The Ford Econoline was, until recently, the most ubiquitous van in the United States and are still available in plentiful quantities on the used market. What they lack in sophistication, build quality and creature comforts they make up for in durability, ease of repairs and relatively low cost.

The last year of the E-Series van was the 2014 model year. Since then it has only been sold as a “cut-cab” chassis, and can still be found frequently used for ambulances, Class-C RVs or shuttle buses.

Sportsmobile still makes and sells campers based on the Econoline cut-cab chassis, and they are the gold standard for hardcore off-road adventure vans.1)

All of the gasoline V-6/8/10 engines offered in the later generations of vans were the “2-valve” engine, as opposed to the “3-valve” found in pickup trucks. While they make less power than their truck brethren, they're also generally more reliable as they do not suffer from the cam phaser issues that plagued the 3-valve engines. See the Known Issues page for more details.

Depending on the year, the Econoline vans were offered with the following engines:

The interior roof height of all stock Econoline vans is identical:

From 1997-2014, the Econoline was only offered in one wheelbase length:

They were offered in two body lengths:

From 1992 - 2014, the vans share similar chassis and mechanical under-pinnings. Most of the differences to the body and interior are cosmetic, and the drivetrain saw incremental updates through the years in response to tightening emissions regulations.

All model years were available with either 60/40 “barn doors” or a sliding door. Barn doors are generally preferred. 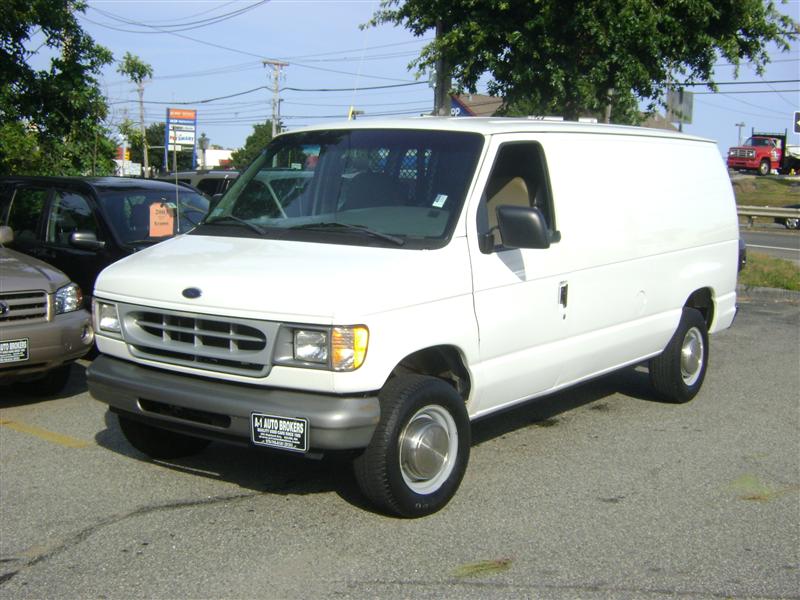 Identifiable by the 8-segment grill. The grill can be plastic or chrome depending on the trim level. 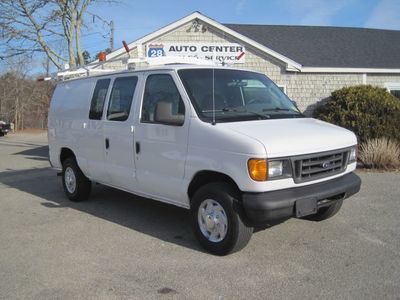 Identified by the slightly revised grill with three horizontal bars. 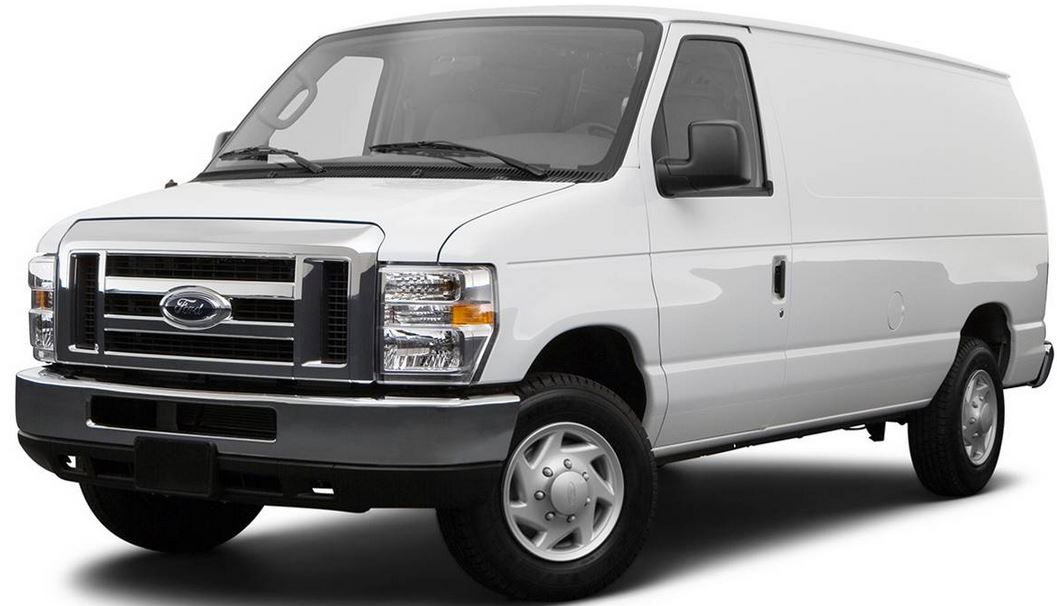 The final generation received got a large grill and boxier front end. The grill can be either black plastic or chrome. The interior was revised in 2009. Mechanically, this generation got much larger and more powerful brakes.

Avoid the diesels for this generation as well.

High Tops They frequently had fiberglass high roofs installed by aftermarket outfitters for use as ambulances, wheelchair transport vans or passenger shuttle vans. These can be particularly desirable for vandwelling.

Lift Kits. These are one of the most capable vans to lift, due to their body-on-frame construction. Lift kits up to 6" are available.

Anti-Theft. Jimmy Jammers are highly recommended, as these vans are easy to steal.

One of the most common topics in modern van-dwelling is comparing the older style vans (Such a the Econoline, GMC Express/Savanah, Astro/Safari or other Conversion vans) with the more modern euro-style vans (Transit, Sprinter, Promaster).

Durability. The E-Series vans were built with two singular goals in mind; to be durable workhorses, and to be inexpensive to build and run. And in these two metrics, they succeed admirably. With a few notable exceptions (see below), most model year 2000+ Econolines vans can go 250,000+ miles without any major repairs and 300,000+ mile vans are not unheard of. Generally the body will rust away before the engine or drivetrain ever experiences a major failure.

Cost The vans were sold with MSRPs that are less than half of a modern Transits, and Ford built over 3 million of them over the last three generations. This equates to a used market that is plentiful and diverse, with a very wide selection of accessories. Even in the overheated used-vehicle market of 2021/2022, clean vans with low miles can be found reliably for less than a third of what a Transit or Sprinter will cost.

Maintenance. They're easy to work on, with most shops having seen hundreds or thousands of them over the course of their lifetime. Finding a mechanic who knows them is easy, with parts new and used being cheap.

Driveline flexibility. Because these are body-on-frame vehicles (compared to modern uni-body vans), they are much more tolerant of abuse and modification. Lift kits up to 6" are available, and the bodies are able to fit very large wheel and tire options for serious off-roading capabilities. 4×4 conversions are still available in limited quantities from upfitters such as Quigly or Quadvan.

Towing. Of this there is no dispute; the Econolines are the vehicle you want if you're towing a heavy trailer. Depending on the engine/transmission/axle ratio, the E-350 can tow up to 10,000lbs, almost twice what a Transit can pull, and it will do so reliably. The 5-speed automatic transmission that was optional behind the 5.4L V-8 and standard behind the 6.8L V-10 is particularly desirable for those who are pulling a lot of weight.

Build Quality. The vans were built quickly and cheaply, and while the drivetrain and mechanical parts are reliable the interior fit-and-finish leaves a LOT to be desired. Sound deadening/insulation is almost nonexistent. Squeaks, rattles, engine & wind noise are a daily part of life in an E-Series, and while these can be mitigated to a limited extent they will never have the tight and quiet feeling of a modern vehicle. The final generation (2009-2014) is slightly better but not by much.

Amenities. There aren't any. Even things like very basic cruise control are a rarity. None came with backup cameras, forget about things like bluetooth or blind-spot detection or power/heated seats or power-folding mirrors.

The good news is that they're very easy to put aftermarket head units into, so you can at least get some tunes going through the (terrible) speakers that are in the door and no where else.

Fuel Economy is an oxymoronic term in an E-series. Consider yourself lucky if you're in the double-digits.

Ride quality. They drive like a truck. And not a modern luxo-barge Ferd Fteenthousand Platinum, but like your grandfather's old cement mixer or farm truck. Because they are.

Rust. They are very prone to it, and will usually limit the van's life more than the mechanical components will. Sourcing a van from California or the desert southwest is highly recommended.

Roof height. Only children can standup in the back of a stock E-Series, so if you want a taller van you're going to have to find something that was modified by an aftermarket converter. The quality of these conversions can vary greatly, but looking for former wheelchair transport vans can find some good options.

The vans are not difficult to steal; a flat-head screwdriver and maybe a hammer is all that's needed to punch out a door lock. There's no computer chip in the keys, so if someone can turn the ignition cylinder by force (again not hard, screwdriver and maybe pliers), the engine will start. It is highly recommended to install a hidden kill switch (the start relay and/or fuel pump relays are popular), and to reinforce your door locks with kits such as the Jimmy Jammer.

The 4.2L V-6 (used from 1997–2003) is barely able to keep up with traffic, and so under-powered that it's almost dangerous if you have any weight in the van. It usually gets worse gas mileage than the V-8s, because you're constantly having to floor it just to keep moving.

The 4.6L and 5.4L V-8s are acceptable, and the 6.8L V-10 is quite potent and makes short work of mountain passes and steep inclines.

The 2008 model year (and newer) got much better brakes than prior years. The 2009+ interiors are a bit more modern feeling.

Due to some well-intentioned (but ultimately misguided) laws passed in the early 2000s, it's not uncommon to find former government/fleet Econolines that have been converted to run on Propane or CNG. These are most commonly found in California and the southwest, and can often be temptingly cheap on the used market (selling for less than $3,000 in good condition).

Unfortunately, the companies that made these conversion kits are long since out of business which means that spare parts and manuals/support are nonexistent. Plus you're limited to running on Propane/CNG, which is getting harder and harder to find.

Converting the vans back to run on gasoline involves replacing the entire intake, fuel system, engine computer and wiring harness. You'd need almost an entire donor van worth of parts to do it, as trying to buy the parts one by one would be prohibitively expensive.

Because of these problems it's generally best to avoid these vans, as they're going to be far more trouble than they're worth.

1)
Which is appropriate, because they're so expensive they might as well be made out of gold
rv/ford_e-series.txt · Last modified: 2022/05/09 21:36 by princess_fluffypants