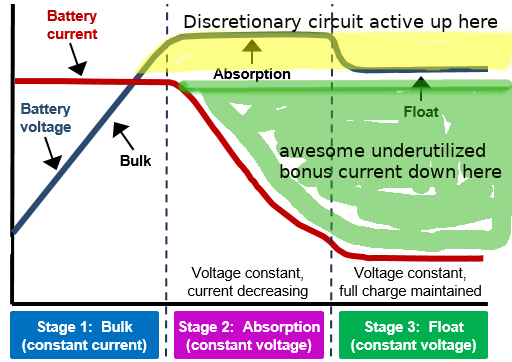 Solar power installations are generally designed as if the load[s] will be steady around the clock. This can lead new folk into buying too much battery.

In practice, actual loads may be heavier in the daytime (as when working with power tools) or at night (as when watching movies or running a forced-air furnace).

If loads are applied attentively (or automatically!) one can run electrical loads that do not affect the battery bank's State of Charge at all. Additionally, consuming loads at the right time can also increase the health and longevity of lead batteries.1)

how much surplus current is there?

It is common for Lead-Acid batteries to consume C/100 or C/200 amps to Float, meaning that during Float you will have at least 99% your panels' output2) available for loads.3)

There will generally be more “surplus” power available when using MPPT charge controllers v. PWM,6)7) though the difference is less dramatic during periods one would run opportunity loads (see below). Siphoning off power can actually help PWM controllers run cooler by reducing the ON-OFF switching activity that generates heat.

when to run opportunity loads

The best time to run non-essential loads is when there is surplus current over what battery charging needs. This means during Float, or after current has started dropping off in Absorption. For LiFePO4 there is excess power any time after the bank has reached the intended charge state.

Opportunity loads should not be applied during Bulk stage since Bulk, by definition, means the battery is taking all the available current.8)\

PWM controllers will make most power during Absorption when voltage is highest. Wait until current demand falls low enough that your loads will not affect Absorption.

The trickiest part of running opportunity loads is running them at the right time so battery charging is not affected.

You can start the loads manually (ie, start using the power when you have extra). This is error-prone but is free and requires no equipment (except your own memory).

The most precise way to do it automatically is to use a charge controller that can act as a diversion controller. Charge controllers with this feature tend to be expensive, and tend to run in either solar or dump load mode. This may be preferable with lithium or other chemistries that do not require multistage charging.

Read the documentation and ask their techs questions before taking this $$$ approach.

The Victron BMV-700 battery monitor can act as a programmable relay controller9), turning loads off/on at a given state of charge.

A free way to automate opportunity loading is to set the normal controller's LOAD or external Low Voltage Disconnect to shut off below Vfloat.

To run loads heavier than the rating of the LVD or LOAD output use a relay between the LVD and the load. 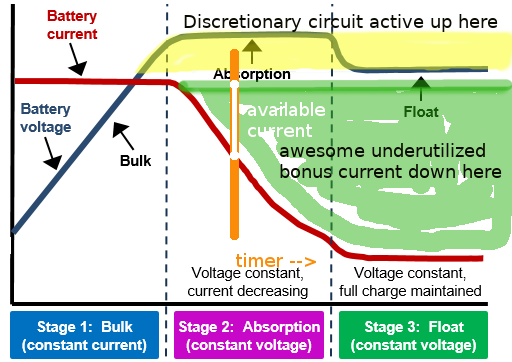 A 12v timer could give the system a chance to make some progress in Absorption before starting up opportunity loads. If mistimed or overly heavy loads applied, Absorption duration could be affected.

In this approach the LVD is set just below Vfloat as above, but activation of the loads is delayed by some amount of time. Observation of the system during charging will suggest how long it normally takes takes charging amperage to drop off (ie, when the system has surplus current).

Suggested delay for conservative opportunity loading == the time from [passing Vlvr setpoint during Bulk] to [completed charging].10). This delay might be 2-5hours.

Suggested delay for aggressive opportunity loading == the time from [passing Vlvr setpoint during Bulk] to [far enough into Absorption that enough current is available to power intended loads]. This delay might be 30-60 minutes, depending on the charging rate.

This setup avoids timer juggling/estimation and does not affect Absorption charging.The downside is the opportunity circuit engages much later.

Similar to the above, this setup looks like: [LVD or controller LOAD output] –> timer –> relay –> load

For best results the opportunity load should be sized to the excess power. Otherwise the system could go into dump/recharge cycling.