This wiki is aimed primarily at vandwellers but much of the information is usable by cardwellers. Below are some topics that may differ between car- and van-dwelling

Note: if you are new to cardwelling or doing it out of necessity, see this article on involuntary vehicle-dwelling.

Cargo cans and similar will usually have much more “living space” inside than cars; after all they were designed to haul cargo.

Car-dwellers will probably not be able to use the typical vandweller bucket toilet inside the car.

Electrical power can be extremely challenging for cardwellers. Power generation and storage components as found in campervans tend to be physically too large/heavy, overpowered, or otherwise impractical for car used. There are no solutions that are simultaneously easy, inexpensive, and size-appropriate for cars.

The most common way to access alternator power is through the cigarette lighter, sometimes called an accessory power port.

Cigarette lighters outlets are typically fused at 10A, so it's safest to assume you will only be able to pull 120w total from them without popping a fuse. Pro tip: check the fuse sizes for your car and carry extras, especially fuses for the ciggy port.

You can run 12v (DC) devices that have a male cigarette connector from the outlet. 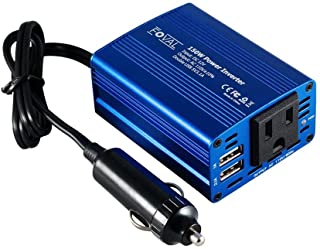 You can also run a small inverter off the port. Caveats:

Larger inverter loads can be run if one bypasses the cigarette lighter and connects to the battery directly with alligator clips or by adding wiring.

Many inverters in the 300w+ range come with alligator clips to connect directly to the starter battery. Example: Aims Aims 300w PSW and Bestek 500 MSW models. Their usefulness is somewhat limited because you can only use them with the hood up and car idling.

Running wire (with appropriate fuse) from the engine compartment to the passenger compartment will allow you to run larger loads while driving. Example: cooking with excess power while on a road trip or long commute.

Newer vehicles may also have USB ports for charging small devices like phones and tablets.

Solar power has substantial benefits including:

but takes physical space that is not always available in cars. The panels themselves are rather large and require wiring to connect them wherever the power is to be routed.

Shore power is wall power, places where you can plug in. If you are “driveway surfing” or renting a campsite with a power pedestal you may have the option of running an outdoor-rated extension cord to your car.

Storing excess power may be the most challenging aspect; the starter battery holds power but that should be reserved for starting the vehicle.

Solar generators are a simple although relatively-expensive solution to power storage in cars.

They can be charged from the cigarette outlet or from solar panels, or from wall power while you are at work or in a place where outlet power is available. It may be counterintuitive, but depending on the device's specifications it may actually charge faster using a small inverter to run the wall charger than using the cigarette outlet cord.1)

People with limited power needs (charge phone, run personal fan) may do fine with a USB power brick (example: Anker 20,000mAh portable charger. Charge from wall power when available or from USB adapter while the car is running.

Some units also have handwarmer functions which may be useful in cold weather.2)

Power ratings can be a bit confusing; the 20,000mAh unit above is more plainly understood as 20A @ 5v.3). While it may look like a marketing ploy, it is also a historical artifact from when lithium batteries were quite small and 150mAh was easier to parse than something like 0.0150Ah.

Jump packs are USB power packs on steroids. They tend to have larger internal capacity and also the ability to produce 12v to help start dead car batteries. The unit shown here also has a ~60w inverter built in for light loads.